FORT WORTH, Texas – The Hogan Trophy Award Foundation and Friends of Golf (FOG) have announced that Jon Rahm, the award’s lone two-time recipient and the current No. 8 player in the Official World Golf Rankings, will be the featured guest at the 2019 dinner for the Ben Hogan Award presented by Konica Minolta Business Solutions U.S.A., Inc. (Konica Minolta).

“We are thrilled to have Jon join us at Colonial Country Club again this May,” Foundation Co-Chairmen Harold Muckleroy and Clif Overcash said in a statement. “From the first day we met him, Jon has been a terrific ambassador for the Ben Hogan Award. We know our guests will enjoy hearing from one of the best players in the world.”

Rahm, who played collegiately at Arizona State, was named the Ben Hogan Award recipient in back-to-back years (2015, 2016). He won 11 college tournaments during his career, the second most in school history behind only Phil Mickelson (16).

He also spent an all-time record 60 weeks as the No. 1 golfer in the World Amateur Golf Ranking. Rahm also competed for Team Europe at the 2014 and 2015 Arnold Palmer Cups and was the low amateur at the 2016 U.S. Open.

Since turning professional in the summer of 2016, the 24-year-old has a pair of PGA TOUR victories, 25 top-10 finishes and has collected more than $12 million in earnings. Rahm also has three wins on the international circuit, and was a member of the victorious Team Europe at the 2018 Ryder Cup. The native of Barrika, Spain, has been ranked as high as No. 2 in the world rankings.

The 2019 Ben Hogan Award Dinner will be held Monday, May 20, at Colonial Country Club. Rahm will be on stage for a sit-down interview with emcee Brian Estridge. Later in the week, Rahm will be participating in the Charles Schwab Challenge on the Colonial course. In two previous appearances at Fort Worth’s PGA TOUR stop, he has finished tied for second (2017) and tied for fifth (2018).

All three finalists for the 2019 Ben Hogan Award, who will be named on May 2, will be in attendance the black-tie dinner, where the winner will be crowned. To purchase tickets, call (817) 927-4280. 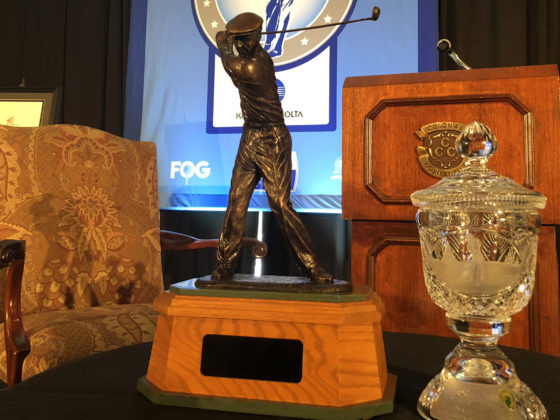