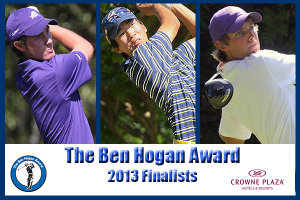 FORT WORTH, Texas (May 8, 2013) – The Crowne Plaza® Hotels & Resorts brand, in conjunction with Colonial Country Club, The Friends of Golf (FOG) and the Golf Coaches Association of America, has announced the three finalists for the 2013 The Ben Hogan Award. Alphabetically, the finalists are: TCU sophomore Julien Brun, California sophomore Michael Kim and Washington senior Chris Williams.

Brun, a native of Antibes, France, has recorded a trio of collegiate victories this season, winning the Carmel Cup, Wyoming Desert Intercollegiate and National Invitational Tournament. In addition, the first-team All-Big 12 selection has eight top-10 finishes in 11 events while posting a 70.45 scoring average. Brun also had a runner-up finish at the 2012 NCAA Championships, the first event of the current award’s season.

In addition, Brun won the European Challenge Tour’s 2012 ALLIANZ Open Toulouse, becoming the sixth amateur ever to win on the professional tour. A key figure in Team Europe’s comeback victory at the 2012 Palmer Cup, he recently earned a spot on the 2013 European squad. In the fall, he placed fourth individually at the World Amateur Team Championship while representing France.

Kim is currently the No. 1-ranked player in both the Golfweek/Sagarin college rankings as well as in the Golfstat individual rankings. The sophomore, who was named the Pac-12 Player of the Year on Tuesday, has four individual collegiate victories to his credit, winning the Isleworth Collegiate Invitational, Arizona Intercollegiate, Fresno State Lexus Classic and Southern Highlands Collegiate Masters. In 12 college tournaments this season, he has finished no lower than 11th.

Kim also has helped California equal the NCAA single-season team victory record (10). A native of Del Mar, Calif., he will compete on the United States’ 2013 Palmer Cup team. In amateur competition last summer, he reached the match play at the 2012 U.S. Amateur and advanced to the round of 16 at the U.S. Amateur Public Links. He also had five top-10 finishes in amateur stroke play events.

Williams is the world’s No.1-ranked amateur in both the World Amateur Golf Rankings and the Scratch Players World Rankings. He was the 2012 recipient of the Mark H. McMormack Medal as the world’s top-ranked amateur to clinch berths into the 2013 U.S. Open and the Open Championship. A product of Moscow, Idaho, he swept the 2012 Western Amateur match play and stroke play titles. He also advanced to the quarterfinals of the U.S. Amateur last summer.

Collegiately, Williams has seven top-10 finishes in 10 events this year, including three runner-up showings. The first-team All-Pac-12 selection boasts a 71.06 season stroke average. Additionally, he helped the United States claim the Eisenhower Trophy at the World Amateur Team Championships in the fall. He also competed for Team USA in the Palmer Cup and the Copa de las Americas.

All three finalists will attend a black-tie banquet at Colonial Country Club on Monday, May 20, prior to the start of the PGA TOUR’s Crowne Plaza Invitational at Colonial. The winner will be crowned at the banquet, which will be streamed live beginning at 7 p.m. (CT). The keynote speaker is Corey Pavin, a two-time Colonial winner, 1995 U.S. Open champion and former U.S. Ryder Cup team captain and player.

The 2013 The Ben Hogan Award recipient will receive an exemption into the PGA TOUR’s 2014 Crowne Plaza Invitational at Colonial, as well as earn a grant for its men’s golf scholarship program. Last year, the winner’s university received a $20,000 grant, while the other finalists’ schools each received $10,000 grants.

The Ben Hogan Award is presented annually to the top men’s NCAA Division I, II or III, NAIA or NJCAA college golfer taking into account all collegiate and amateur competitions during the 12-month period dating from the previous award’s banquet. The Ben Hogan Award selection committee is made up of 23 leaders and experts in amateur, college and professional golf.

To find the latest information on The Ben Hogan Award, its candidates and its previous winners, visit the official web site www.TheBenHoganAward.org and follow @BenHoganAward on Twitter.

Part of the IHG global portfolio, the Crowne Plaza® Hotels & Resorts brand is a dynamic upscale hotel brand located in nearly 65 countries around the world in major urban centers, gateway cities and resort destinations. As the fourth largest upscale full-service hotel brand in the world and one of the fastest growing, the Crowne Plaza brand has a solid foundation for future growth. The portfolio has doubled since 2003 to nearly 400 hotels, and the global pipeline has increased fourfold to nearly 100 hotels. At Crowne Plaza hotels, we help our guests feel energized and productive, with 24-hour business services, wireless high speed Internet access in the lobby, and fitness and leisure facilities. Our Sleep Advantage® program ensures our guests get a great night’s sleep to power through their day. For reservations at Crowne Plaza properties, visit www.crowneplaza.com or call 1-800-2CROWNE. Connect with us on Twitter: www.twitter.com/crowneplaza or Facebook: www.Facebook.com/crowneplaza.

• Washington’s Chris Williams is the third finalist ever from the school, joining 2010 The Ben Hogan Award winner Nick Taylor and 2004 finalist Brock Mackenzie.

• California’s Michael Kim and TCU’s Julien Brun are the first finalists in their respective school’s history.

• This is the second straight year, but just the third time ever that the award, based in Fort Worth, Texas, has a finalist playing for a university in the state of Texas (Chris Stroud, Lamar, 2005; Jordan Spieth, Lamar, 2012) .

• For the third straight year, all three finalists play collegiate golf west of the Mississippi River.

• All three finalists are ranked among the top 10 in the World Amateur Golf rankings and in the top 12 in the Golfweek/Sagarin Rankings.

• Julien Brun (France) and Nick Taylor (Canada) are the only foreign-born golfers to be named finalists since 2010. The last European to be named a finalist was Jorge Campillo (Spain) in 2009.