FORT WORTH, Texas (April 7, 2021) — The Ben Hogan Trophy Award Foundation has announced the three finalists for Ben Hogan Award March Golfer of the Month accolades are Sam Bennett of Texas A&M, Nick Gabrelcik of North Florida and Benjamin Shipp of NC State. All three golfers won twice during the month.

Bennett, a junior, won the Cabo Collegiate at TPC San Antonio with a 5-under score of 211. He also took first place at the Old Waverly Collegiate with a sum of 205 (-11). The product of Madisonville, Texas, posted a 70.22 scoring average over nine rounds, which also included a tie for 30th at the Tiger Invitational.

Gabrelcik, a freshman from Trinity, Fla., claimed victories in both of his events during the month. He took the title at The Hayt at Sawgrass Country Club with a 10-under score of 206. He also was first at the General Hackler Championship with a 205 (-11). Gabrelcik carried a 68.50 stroke average over six rounds.

Shipp, a senior from Duluth, Ga., won both the Schenkel Invitational (200, -16) and the Hootie Intercollegiate at Bulls Bay (205, -11). He also tied for fifth at the Wake Forest Invitational and shared 25th at the General Hackler Championship. Shipp averaged 69.58 shots per round for the month.

The honor counts any college, amateur or professional event completed during the month. Winning a monthly award is not a prerequisite to be named a Ben Hogan Award semifinalist, finalist or winner.

Fifteen total ballots are eligible to be cast, with 12 coming from members of the Hogan Trophy Award Foundation and Friends of Golf and three social media fan ballots. Those votes are issued to the top vote getter on Twitter, Instagram and Facebook, with the contests open through Monday, April 12 at noon (CT). The winner of the monthly award will be named Monday afternoon.

The Ben Hogan Award is given annually to the top men’s college golfer taking into account all collegiate and amateur competitions over the previous 12 months. The Ben Hogan Trophy was first issued by the Friends of Golf at Bel-Air Country Club in Los Angeles in 1990. In 2002, the Ben Hogan Award moved to Colonial Country Club in Fort Worth, Texas, and revised its criteria to its current standard of honoring the outstanding amateur and collegiate golfer. 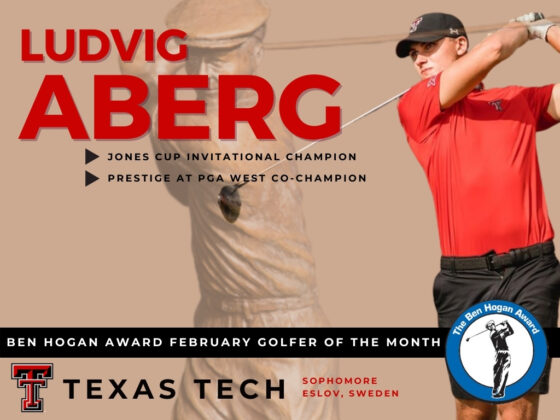 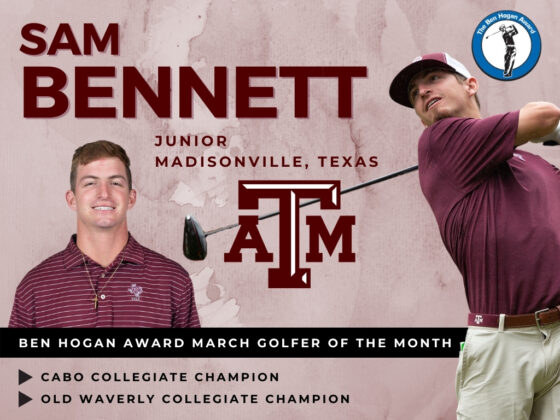