FORT WORTH, Texas (May 20, 2021) — The Ben Hogan Trophy Award Foundation has announced the three finalists for The Ben Hogan Award April Golfer of the Month accolades are Ludvig Aberg of Texas Tech, Minnesota’s Angus Flanagan and Cole Hammer of Texas.

Aberg, a sophomore from Eslov, Sweden, previously was named The Ben Hogan Award’s February Golfer of the Month. In April, Aberg had a trio of top-6 finishes, highlighted by a victory at the Thunderbird Collegiate with a 12-under score of 201. He also placed fourth at the Big 12 Championships and sixth at the Aggie Invitational. For the month, he posted a 69.70 stroke average over 10 rounds.

Flanagan, a senior, won a pair of events during the month, claiming titles at both the Boilermaker Invitational and the Git R Done Husker Invitational with identical three-round scores of 207. He became the first Gopher since 2014 to win back-to-back events. In addition, the native of Woking, England, placed 26th at the Hoosier Collegiate and carried a 71.33 stroke average throughout April.

Hammer, a junior from Houston, Texas, was crowned the Big 12 Conference champion at Prairie Dunes with a 72-hole sum of 276 (-4). In addition, Hammer collected top-10 showings at both the Aggie Invitational (sixth) and The Calusa Cup (ninth). For the month, he owned a 70.90 stroke average that included a 5-under 65 and a 3-under 67 over the final two rounds of the Big 12 Championship.

The monthly honor counts any college, amateur or professional event completed during the month. Fifteen total ballots are eligible to be cast, with 12 coming from members of the Hogan Trophy Award Foundation and Friends of Golf and three social media fan ballots. Those votes are issued to the top vote getter on Twitter, Instagram and Facebook, with the contests open through Friday, May 20 at noon (CT). The winner of the monthly award will be named Friday afternoon. 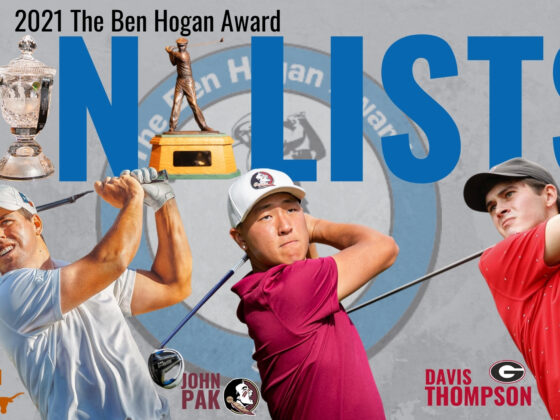 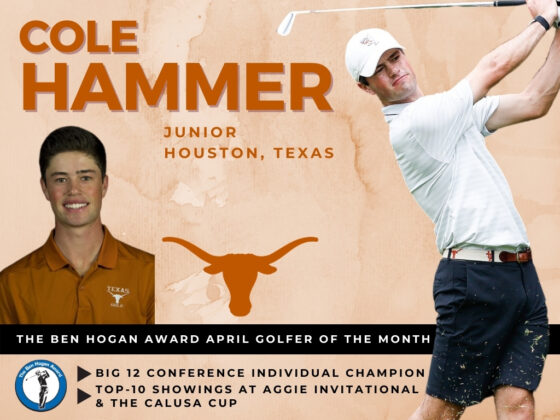