FORT WORTH, Texas (Nov. 13, 2020) — The Ben Hogan Trophy Award Foundation has announced that Texas Tech senior Kyle Hogan has been voted the Ben Hogan Award October Golfer of the Month.

Hogan collected his first career college victory at the Maridoe Collegiate Invitational (Oct. 18-20) with a three-round score of 215. The product of Cypress Ranch, Texas, was the only one of the 72 participants to finish under par (-1) during a tournament that featured an average score of 76.24. The field included 10 players ranked among the top 60 in the World Amateur Golf Rankings, including seven inside the top 25.

Hogan’s victory at the prestigious college event earned him an exemption into last week’s Vivint Houston Open on the PGA TOUR. He shot rounds of 81-69 in his first TOUR event.

Hogan is listed 84th in the Scratch Players World Amateur Rankings and No. 101 in the World Amateur Golf Rankings. He is the first golfer from the Big 12 Conference to collect the monthly award since Baylor’s Cooper Dossey in September of 2019.

Fifteen total ballots were cast, with 12 coming from members of the Hogan Trophy Award Foundation and Friends of Golf and three social media fan ballots. Those votes were issued to the top vote getter on Twitter, Instagram and Facebook. Hogan won the Facebook vote, while Goff earned the Instagram and Twitter ballots. 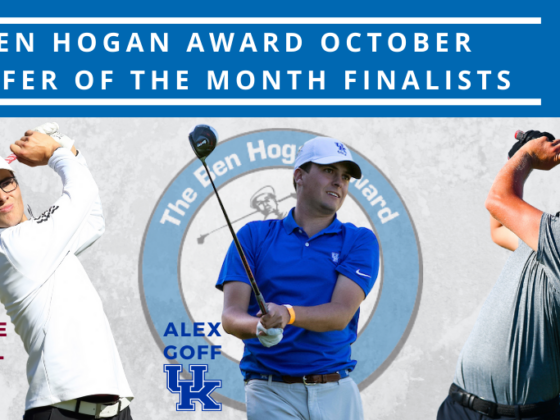 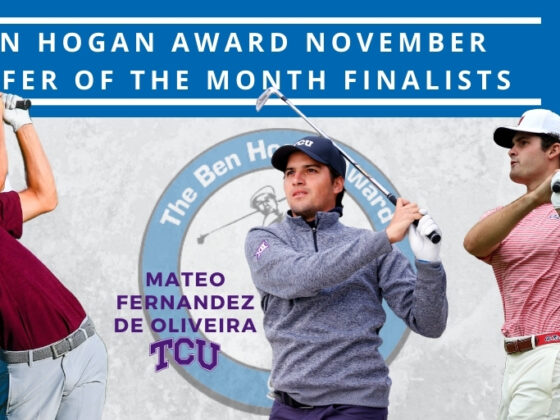