Aberg, a sophomore from Eslov, Sweden, won both tournaments he participated in during the month. He began by taking the trophy at one of the nation’s most prestigious amateur events, the Jones Cup Invitational, by one shot with a 2-under 214. Aberg added another victory by sharing first place in a 120-player field at the Prestige at PGA West with a 209 (-4).

Overall, the No. 2-ranked player in the Scratch Players World Amateur Ranking (SPWAR) and fifth-ranked in the World Amateur Golf Ranking (WAGR) carried a 70.50 stroke average for the month.

He is the second Red Raider to win the honor this year, joining Kyle Hogan (October 2020). In addition, he is the second straight Sweden native to claim the accolade, following Florida State’s Vincent Norrman.

The monthly honor counts any college, amateur or professional event completed during the month. The other February finalists were Colorado State’s AJ Ott and Arizona State’s David Puig.

Fifteen total ballots were cast, with 12 coming from members of the Hogan Trophy Award Foundation and Friends of Golf as well as three social media fan ballots. Those votes were issued to the top vote getter on Twitter, Instagram and Facebook. Aberg won the Facebook ballot, while Ott earned the Instagram and Twitter votes. Winning a monthly award is not a prerequisite to be named a Ben Hogan Award semifinalist, finalist or winner. 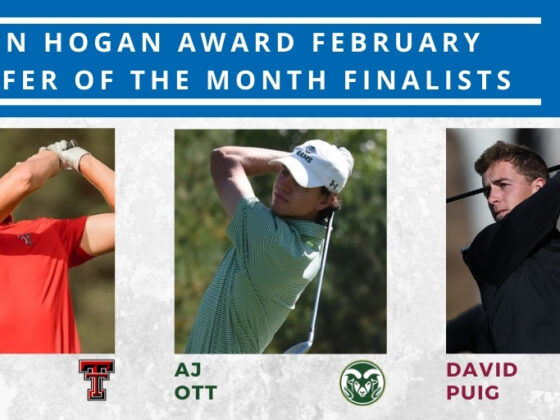 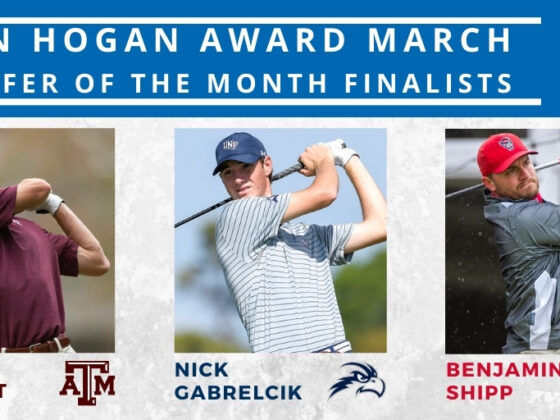