FORT WORTH, Texas (Jan. 8, 2021) — The Ben Hogan Trophy Award Foundation has announced that Sam Houston State senior Will Holcomb has been voted the Ben Hogan Award December Golfer of the Month.

Holcomb was the stroke play medalist at the highly-rated Maridoe Amateur with a 54-hole sum of 218 (+2). The native of Crockett, Texas, won medalist honors by three shots in the 96-player field before picking up three match play wins to advance to the event’s quarterfinals. In addition, Holcomb tied for 51st at the South Beach International with a 72-hole score of 284 (E).

Holcomb is currently rated 17th in the Scratch Players World Amateur Ranking and is No. 73 in the World Amateur Golf Ranking. He was a semifinalist at the 2019 U.S. Amateur.

The Ben Hogan Award’s monthly honor counts any college, amateur or professional event completed during the month. The other December finalists were Texas’ Cole Hammer and Auburn’s Graysen Huff.

Fifteen total ballots were cast, with 12 coming from members of the Hogan Trophy Award Foundation and Friends of Golf and three social media fan ballots. Those votes were issued to the top vote getter on Twitter, Instagram and Facebook. Holcomb swept all three social media votes. 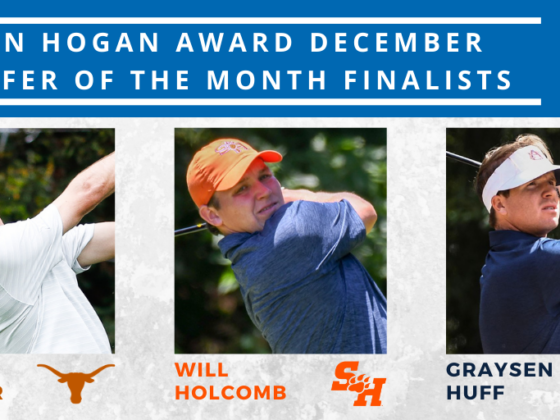