FORT WORTH, Texas — The Ben Hogan Trophy Award Foundation has announced that Georgia Tech senior Tyler Strafaci has been named the Ben Hogan Award July Golfer of the Month.

Strafaci won back-to-back events during the month, claiming both the North & South Amateur and the Palmetto Amateur. In the process, he joined his grandfather, Frank (1938-39), as winners at the North & South at Pinehurst. After tying for 14th place in stroke play (138, -2), the product of Davie, Fla., won five matches, punctuated by a 3&1 win in the championship.

Strafaci is ranked ninth in the Scratch Players World Amateur Rankings and No. 56 in the World Amateur Golf Ranking. He is currently competing at the 120th U.S. Amateur, where he has reached the match play quarterfinals.

Strafaci becomes the third Georgia Tech golfer to collect the Ben Hogan Golfer of the Month honor since it began last August, joining teammates Andy Ogletree (August 2019) and Noah Norton (December 2019). Due to tournament cancellations caused by COVID-19, this was just the eighth honor ever given and the first since February.

Fifteen total ballots were cast, with 12 coming from members of the Hogan Trophy Award Foundation and Friends of Golf and three social media fan ballots issued to the top vote getter on each platform. The other finalists for the monthly honor were Jack Gnam of Ole Miss, the Cotton States Invitational champion, and SMU’s Mac Meissner, the winner of the Southern Amateur. Meissner won the Instagram and Twitter contests, while Gnam claimed the Facebook vote.

The Ben Hogan Award is awarded annually to the top men’s college golfer taking into account all collegiate and amateur competitions over the previous 12 months from June to May. The Ben Hogan Trophy was first issued by the Friends of Golf at Bel-Air Country Club in Los Angeles in 1990. In 2002, the Ben Hogan Award moved to Colonial Country Club in Fort Worth, Texas, and revised its criteria to its current standard of honoring the outstanding amateur and collegiate golfer. 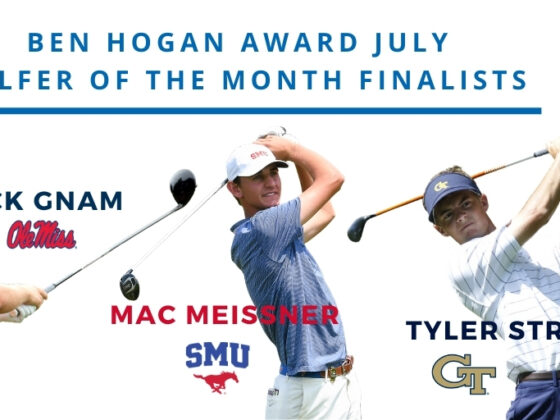 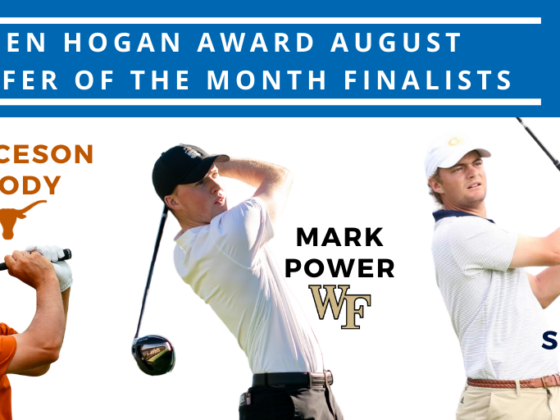