FORT WORTH, Texas (Oct. 4, 2019) – Baylor’s Cooper Dossey has been named the Ben Hogan Award’s September Golfer of the Month, the Hogan Trophy Award Foundation’s Board of Directors announced today.

Dossey, a senior from Austin, Texas, won the individual title at the highly competitive OFCC/Fighting Illini Invitational by one stroke with a 4-under score of 206. The 81-player field consisted of seven teams currently ranked in the top 25 of the Bushnell/Golfweek Coaches Poll, including three of the nation’s top 5 teams.

He also placed fifth at the Gopher Invitational with a 3-round total of 211 (-2). For the month, he carried a 69.50 stroke average over two college tournaments and led the now No. 3-ranked Bears to two team titles.

Dossey is ranked 27th in the Scratch Players World Amateur Ranking and No. 91 in the World Amateur Golf Ranking. After three college tournaments he currently is listed 19th in the Golfweek/Sagarin ratings and owns an overall head-to-head record of 208-13-4.

The other finalists for September Golfer of the Month plaudits were USC freshman Yuxin Lin and Florida State junior John Pak. This was the second monthly honor ever awarded by the Hogan Trophy Award Foundation. Georgia Tech’s Andy Ogletree, the 2019 U.S. Amateur champion, claimed the August honor.

Eighteen total ballots are eligible to be cast, with 15 coming from members of the Foundation’s Board of Directors and three social media fan ballots. Those votes are issued on behalf of the top vote getter on Twitter, Instagram and Facebook. This month, Dossey swept all three social media votes.

In line with the yearly Ben Hogan Award, committee voters consider all college, amateur and professional event results. Winning a monthly award is not a prerequisite to be named a Ben Hogan Award semifinalist, finalist or winner.

The Ben Hogan Award is given each May to the top men’s college golfer taking into account all collegiate and amateur competitions over the previous 12 months. The Ben Hogan Trophy was first issued by the Friends of Golf at Bel-Air Country Club in Los Angeles in 1990. In 2002, the Ben Hogan Award moved to Colonial Country Club in Fort Worth, Texas, and revised its criteria to its current standard of honoring the outstanding amateur and collegiate golfer. 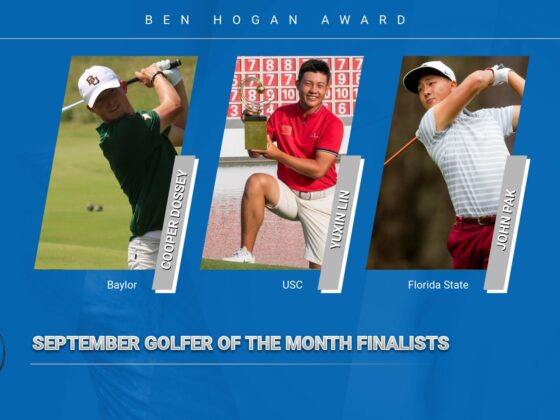 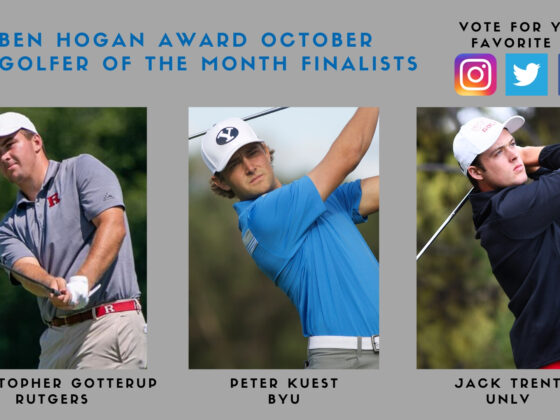